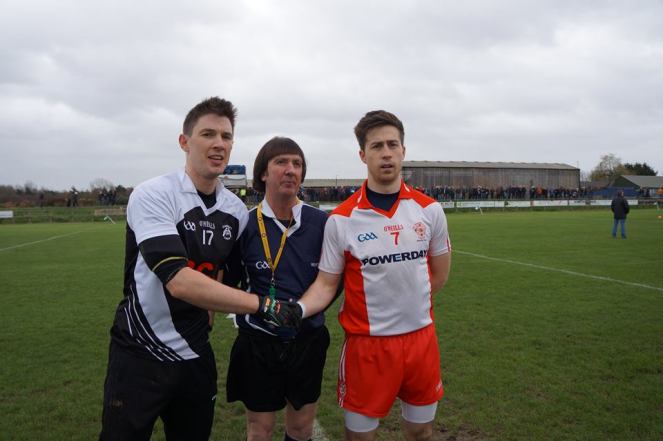 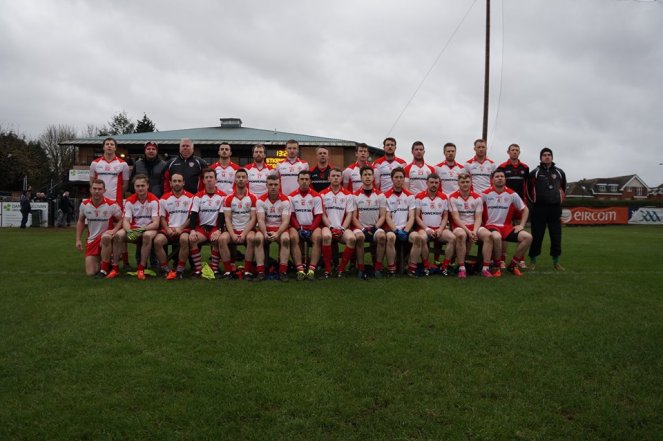 The man of the match Tir chonaill Gaels Cathal Magee was the stand out player for the Gaels in the half forward line looking comfortable on the ball and scored vital points to add to Tir Chonaill Gaels score.

It was a game where tempers threatened to boil over more than once, and players struggled with the difficult conditions.

The Gaels then levelled a few minutes later and had a fair share of the ball before Adrian Hanlon put TCG ahead.

Hanlon then scored the first goal of the game but quickly went from a hero to zero as he was black carded, for a cynical foul.

St Kiernan’s got a goal back with Cathal Og Greene rising the highest above the TCG keeper Traynor to flick into the net. The reprieve was short lived for the Kiernan’s as Seamus Friel restored the TCG lead.

St Kiernan’s worked themselves nicely back into the game, before Michael Callery was black carded shortly before half time.

The Kiernan’s then got themselves ahead of TCG to give the underdogs an unexpected 1-06- 2-02 lead over the favourites at half time.

The second half started, with another two black cards for either side with the Gaels midfielder Liam Gavigan and St Kiernan’s goal scorer Cathal Og Greene receiving black being the men who had to be replaced.

As the second half progressed both teams matched each other point for point, and the game in deadlock until Brian Duddy scrambled the ball over the line for the Gaels third goal of the afternoon to take the lead.

The Kiernan’s desperately tried to get back into the game with the little time left but once again TCG matched whatever St Kiernan’s threw at them and showed their expierence at this level as the took the game away from St Kiernan’s.

Any hope of St Kiernan’s rescuing the game was extinguished when Michael 0`donoughue was red carded in injury time after reacting badly after being tackled late.

In the remaining minute of injury time the Gaels played with ease like they did for the majority of the game with no real threat to their goal with the final ending 3-10 – 1-12.

St Kiernan`s however did themselves proud in their first senior football final and will surely come back stronger for next year’s championship and will look to build on the success of this year and will hope to go one better next year.

The victory is Tir Chonaill Gaels second championship in two years and they will now play Clommel Commercials in Ruislip in the AIB All-Ireland Senior Club Championship quarter final on Saturday 12th December.