The rules of Gaelic Football are the following.

The positions in Gaelic Football are the same in Hurling. 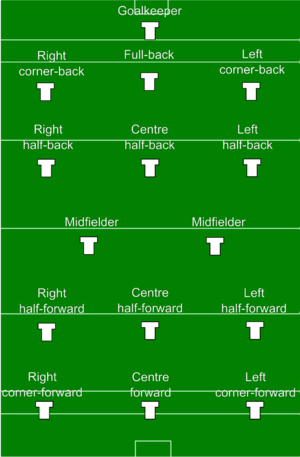 The game is played with a round leather football  made of 18 stitched leather panels, similar in appearance to a traditional volleyball  (but larger), with a circumference of 69–74 cm (27–29 in), weighing between 370–425 g (13.1–15.0 oz) when dry It may be kicked or hand passed. A hand pass is not a punch but rather a strike of the ball with the side of the closed fist, using the knuckle of the thumb.

The following are considered technical fouls (“fouling the ball”):

A dissent foul is a foul where a player fails to comply with the officials’ judgment and/or instructions. The player can be cautioned (shown a yellow card), ordered off the pitch without a substitute (red card), the free kick placement moved 13m further down-field, or in certain circumstances, the game can be terminated. The following are considered dissent fouls:

If the ball goes over the crossbar, a point is scored and a white flag is raised by an umpire. A point is scored by either kicking the ball over the crossbar, or fisting it over, in which case the hand must be closed while striking the ball. If the ball goes below the crossbar, a goal, worth three points, is scored, and a green flag is raised by an umpire. A goal is scored by kicking the ball into the net, not by fist passing the ball into it. However, a player can strike the ball into the net with a closed fist if the ball was played to him by another player or came in contact with the post/crossbar/ground prior to connection. The goal is guarded by a goalkeeper. Scores are recorded in the format Goal Total-Point Total. To determine the score-line goals must be converted to points and added to the other points. For example 1-7 = 10 points.

Shoulder to shoulder contact and slapping the ball out of an opponent’s hand are permitted, but the following are all fouls:

A football match is overseen by up to eight officials: